5e WNW - Trolls in the Mountain

5e WNW - Session 27 of the weird new world campaign was played on Saturday 10/3. This was the final session of the campaign, and spanned an entire afternoon rather than the usual 3 hours, and so will be split into two posts.

The first order of business after killing a dragon is looting the lair! Bingles was tied to the end of a rope and lowered down the side of the bridge, and swung back and forth toward the cave opening. Guy, after retrieving the javelin of lightning, flew back up, grabbed Bingles, and carried him to the cave mouth. The rope was tied off, and everyone except Bach and Zugun made their way across. Within the cave they discovered that Blightfang had a thing for left shoes, teapots, and a wide variety of bric-a-brac. Aside from these oddities, there was a large pile of coins and gems as well as a couple of magic items! A Tiara of Blasting, a matched set of twinning short swords, and a dwarven maul. Anya claimed the tiara, except for when the party made camp, when Bingles would wear it because it made him feel pretty. Riia claimed the swords, and Kethra the maul.

Returning to the bridge, the party continued on to a doorway set into the sheer side of the mountain. On the face of the door was a trio of nested spinning dials. Nessendra consistently proved that she's "not that kind of cleric" when she blew yet another religion check, all the while proclaiming that she did fine on the tests in school... Guy got bored of watching everyone look at the dial, and flew up to the top of the mountain. There he saw the bowl shaped depression with a black monolith pointing to the full moon directly above. He also saw a doorway leading into the mountain. Figuring that it would take him to the other side of the door, he entered, and took the stairs down... fast! 300 feet later Guy stumbles into a large square chamber. With barely a moment to catch his breath and look around, a large grey head pops out of one of the other doorways, snarls, and lumbers toward Guy, drool dangling from its lips.

Guy turns and runs back up the stairs, flapping his wings for that extra bit of push. He can hear the troll behind him wheezing as it follows behind, but Guy doesn't pause to look, taking flight just as soon as he clears the doorway, and gliding back down to the party. He relays what he found, and they continue to stare at the doorway. Bingles finally gets bored, steps up to the door, and spins the dials! Everyone but Bach scatters for whatever cover and distance they can find.

Stone pillars line the room, and a large black table with sparkling stones is set in the exact center of the room. At the center of each wall is a doorway...

Unfortunately none of this is seen initially as Bach steps purposely into the room, and is promptly pummeled by a hulking troll that was lurking next to the doorway. Worse, 2 more trolls emerged from the doors and closed to attack. Bingles tries to distract the troll, and ends up destroying the harness he used to attach himself to Bach with, and then slices into Bach's tail! Kethra charges in dropping on troll in a single round. Unfortunately it pushes itself back up to bite her before being knocked back down and flamed. Riia slices and dices with her new swords, while Anya uses her bow and debates using the tiara.

Bingles leaps around the battlefield, keeping behind the trolls as best he can, and mostly is ignored, much to the detriment of the trolls. as seen below. 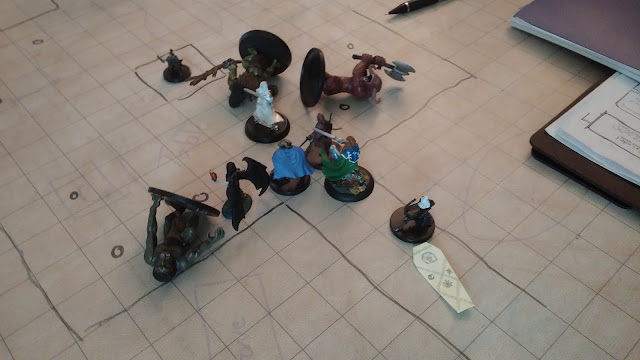 Searching around, the table is discovered to be a star chart with moonstones set on to the obsidian surface. The troll's lair contains an verdi green brass astrolabe that gives off a faint trace of magic. Another set of stairs winds down deeper into the mountain. Deciding that they've got time, and rather than having an unknown behind them, they descend the stairs...

And find another troll lair! 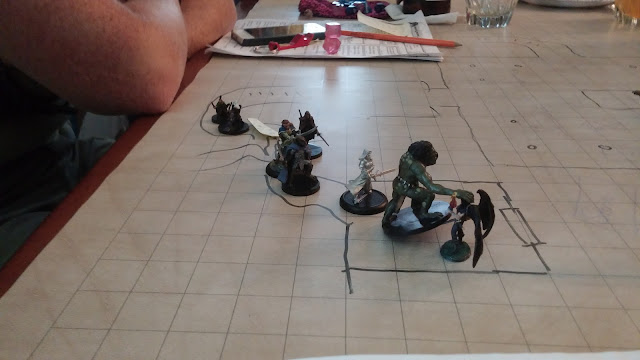 This time there is only one, and he is quickly put down, but not before grabbing Guy by the face and chomping on his shoulder. The only item of note is the barred door. Guy removes the bar, and opts to try to kick it open. The inward swinging door doesn't give, and Guy breaks his toe. Cleaning out the room, the party rests here for the night. The following morning they see a disturbing sight... The moon above has begun to eclipse, and is also much larger in the sky.