Creative Mountain Games hosted August's Blog Carnival on Convention Gaming and here is my contribution, a little on the late side. I actually started writing it in August, but just never got around to finishing it until now, and spurred in part by last weekend's TridentCon.


So you're thinking of running a game at a con? Well good for you! There aren't enough GMs out there willing to step up and do the work. There are some very important things to keep in mind. The most important one is that running a convention game is vastly different than running your home game. Generally you're going to be running for people you don't know, or don't know well, and probably running something that they either have never played before or absolutely love. Either way, you've got 3-4 hours to get it right.

So what do you need to do to get it right?

Don't be overly distracting to the other tables. That's just rude.

Know the game
You don't want to be fumbling through the rule book trying to figure out what's supposed to be happening. Also, know what makes this game something special. Is it the rules? The setting? Or is this just an awesome new adventure? Whatever the answer, you'll want to highlight that fact. Bring it front and center and make sure that your players get to see it.

Don't get so caught up in the rules that you squash the fun. Again, this isn't your home game, so be a little flexible.

Keep it appropriate
Unless you're playing Cards against Humanity or something like that, or are playing at an adults only event, try to keep things PG-13. Especially if there are kids around. Plus, you never know what the sensibilities of the players are going to be, even if those sensibilities seem silly to you. Someone flinches when you say "bastard sword" next time call it a "hand and a half sword" or something. Need a vulgar NPC to employ salty language? Check out these articles on profanity in fantasy and sci-fi.

Spread your attention
Your game can't shine if your players aren't engaged. This means all of them. Granted, there isn't much you can do if they've got their faces stuck in their phones, but baring that, you need to make sure that you regularly check in with each player. Has everyone had a chance to do something cool? Has everyone had a chance to talk and give their input? Some people will be more outgoing than others, but that doesn't mean you should ignore those that sit more quietly.

Remember to have fun!
Chances are really good you aren't being paid to do this. You might even have had to pay to do it! So have fun. Remember you're sharing something you enjoy doing with other people who are open to having fun with you. Let them, and let yourself. You never know what may develop, 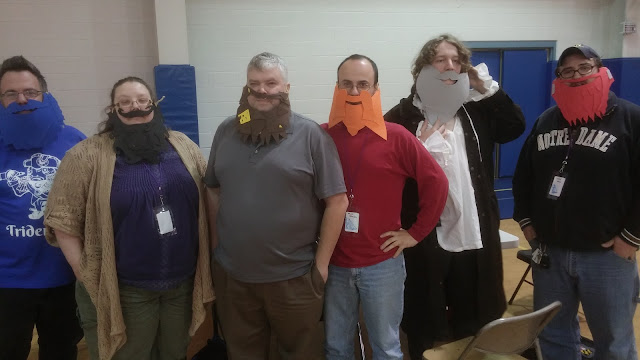 Things got a little beardy during a dwarf themed prison escape game at TridentCon!