A cackling laugh echoed up from the gully. The companions crouched above, trying to see into the foggy gloom. “Gnolls?” Rathgar asked.

“Maybe. If they are, they take their worship of the ghoul-lord rather seriously.” Allianora pointed to a totem wedged into the sidewall of the gully.

Another cackling laugh echoed through the gully, closer this time. “There” Rathgar pointed into the fog. Shapes could be seen loping toward the gully mouth. The first figure out of the fog looked like a gnoll at first glance, but the short horns growing out of her head, and the fact that much of the skin on her face was missing indicated otherwise.

“Demon scum” Allianora spit, pushing herself to a standing position. She began to glow with an inner light. “Crawl back into the darkness that spawned you!” She yelled down, the radiance growing in brightness. Several of the figures still hidden by fog cowered back. 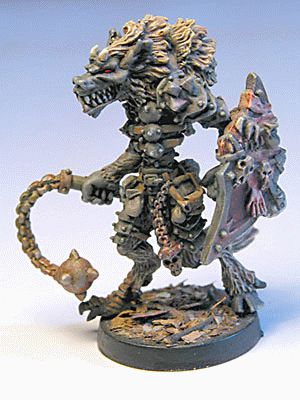 Monster Type: Humanoid (Uncommon).
Flinds are a demonic subspecies of gnolls. Their appearance can vary greatly from that of a baseline gnoll, often sporting unusual skin or fur colors and patterns, horns, spines, and bizarre anatomy. Universally they are smarter, bigger, and stronger than gnolls, and can often be found leading cackles of gnolls (25% chance flinds will be found with gnolls).

Due to their demonic nature, flinds can be turned as undead of 5HD, but they are immune to charm spells, and take half damage from non-magical weapons. Clans of Flinds are usually led by a 6HD Shaman or Wokan, with a demonic hyena companion (treat as a 4HD hellhound).