Sitting down to paint, I thought about what needs doing, and I decided that I really just want to finish the skeletons off. I thought about focusing on one of the character minis, but the tray is too crowded. And one thing I know about me is that I can’t focus if my workspace is cluttered. So, onto the skeletons! 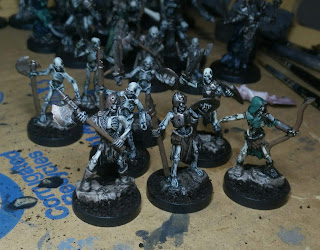 The easy ones are the ones that are pretty much just skeletons. Since I base coated the minis with Dirty Bone, and then washed with sepia wash, it was time to do a highlight. Using Yellowed Bone, I went over them, focusing a lot of attention (relatively) on the skulls. I then moved onto the armored skeletons and did their bones too.

Then I tackled their armor and weapons. I used Blade Steel, but fairly sparingly. I wanted everything to look old and worn and a bit rusty. I then painted the shields Nightmare Black, and used Blade Steel to paint on a stylized version of the Dust King’s crown. It’ll need a little cleaning up. 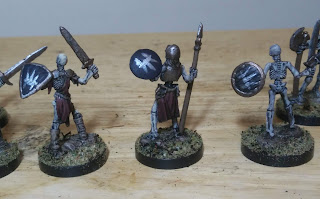 For the cloth bits I used Reaper’s new Succubus Kiss, a kind of purplish crimson. And since I can’t actually focus like I’d like to, I used the Nightmare Black and Succubus Kiss on various bits of the character minis. Then I pulled out a couple of other new colors to paint the dwarf and halfling skeletons, namely Goblin Skin and Kobold Scale. There’s a lot going on in the space between the dwarf’s beard and arms, but I was getting tired so didn’t deal with it. 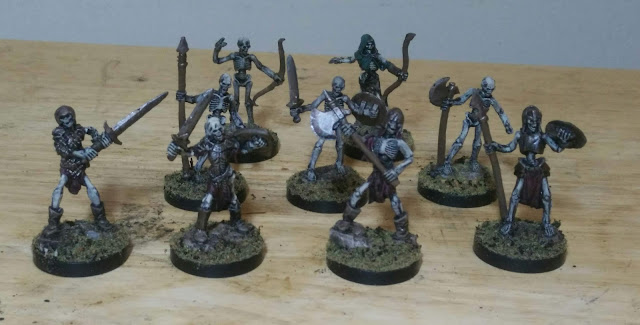 I also glued the Bone Fiend to a new base, and then started flocking the skeletons.Im using the same mix of Woodland Scenics Earth Blend turf along with a bit of other stuff mixed in that I used for the tombstones.

Aside from a bit of detail work (which has since been completed, these guys are done!