5e: Mote in the Eye of Alfather

The path to the Eye of the Alfather continued up the mountain, its scale and the thin air making distances harder to determine. The cavern walls fell away step by step until only open air flanked the icy path. The light of the sun sparkled off the crystals of ice suspended in the breeze. Ahead, the flickering of firelight emanated from behind the pillars of the temple.

Hilde went forward after Bran told her they looked like barbarians. There were 2, and a small white dragon. When Hilde approached, the dragon went into the temple, and the barbarians called for her to halt. They yelled back and forth for a while, basically telling us to go away. Thorin and I got tired of waiting, so I pulled out a scroll, and started yelling about how long we’ve traveled trying to find this place, and that we weren’t just going to wander away. Pointing at the scroll, I walked forward, Thorin at my side, repeating that we’d come a long way, and weren’t leaving without seeing the oracle. Eventually they decided to check with their chief, Wyrmblood.

Getting the okay, we all slowly made our way forward, but it was a trap. Once Bran, Hilde, and Aramel were in the tunnel, 2 massive stone blocks dropped down, sealing them in with one barbarian, and locking Thorin, Harshnag, and I out with one barbarian. They had better luck with theirs, and talked him into being peaceful, while ours made a more fatal choice. He hit Thorin hard a couple of times, and then Thorin hit back harder. 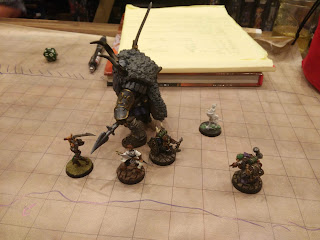 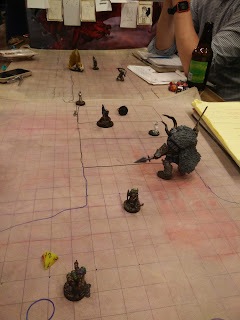 Meanwhile Harshnag had managed to deadlift the first block a few feet off the ground, and Thorin and I scampered under. We saw one barbarian watching another attacking the dragon with Hilde, while Aramel was strumming away, and deeper in the passage a shaman was casting a spell. I got the barbarian with his back to me, the dragon, and the shaman in a line, and let loose a Lightning Bolt! Thorin charged the dragon, but Hilde chopped it down before he reached it. I then used the wand of Magic Missiles to finish off the shaman.

The chief, Wyrmblood looked very worried, more so as Aramel mocked the last standing barbarian to death. Who says words don’t hurt? Thorin charges Wyrmblood, but Hilde gets there first, cutting through his defenses like they weren’t there. I shot him with a ray of frost, and Aramel mocked him. All that combined meant that Thorin, again, didn’t even get the chance to land a blow.

Bran found the switches that controlled the trap, and eventually got the block up, allowing Harshnag in. Up a massive set of stairs, and through a rhine covered door, we entered into a chamber of cyclopean dimensions, with statues of the 7 gods of giants, the 6 representing the major types of giants kneeling around the central Alfather giant. The Alfather faced a magical portal, with 6 runes inscribed on it. Above the portal read: 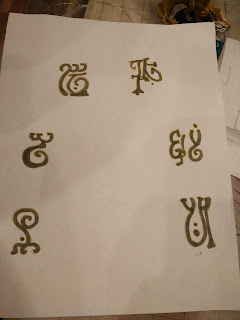 Harshnag assures us that it sounds better in the original Giant. Interesting that the translation happens to rhyme a little…

We recognized a few of the runes, but decided that we’d explore some of the side chambers before tackling the gate.