Way way back in 2011, when life was busy and stressful I gave myself an intermezzo, a break from what I'd been focusing on, a palate cleanser. I’m feeling the need for one again, and so I'm dropping out of running my Wednesday night D&D game in favor of taking some dancing lessons. I'm also going to do a bit of what i did last time, and work on some Hirst Arts terrain! 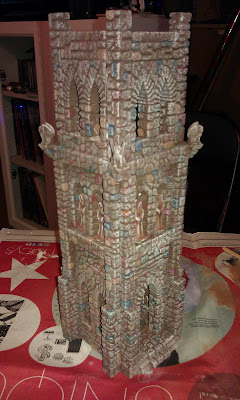 This time, I'm going to build a dungeon! I don't expect it to get much use at the table, but I'm going to use it to help display some of my minis in my new display case!! The spark that kicked this urge off was a chance to pick up some plaster really cheap, and without having to pay shipping since it was available locally.

So I did, and these boxes have been sitting in my living room ever since… But my casting area… well, I didn't actually have a casting area set up. Makes sense, since I haven't poured a mold since 2011. Setting one up was a bit of a problem, the basement was a mess. Seriously disorganized, with way too much crap in it. So I spent most of a day completely rearranging the entire basement. At the end of the day, I had not only set up my casting spot, but also realized that I had a fair supply of bricks already cast!

My plan is to build the basic dungeon, just to get back into the hobby, and then start making some more elaborate rooms and halls. I’d also had thoughts of building a ruined 6” fieldstone tower to base Kaladrax on, as opposed to the big chunk of Bones plastic it came with, and it turns out I have some casts from that mold done as well. This isn’t a high priority project, but something I’m considering as time allows...

Email ThisBlogThis!Share to TwitterShare to FacebookShare to Pinterest
Labels: terrain