A Walk in the Swamp: 5e WNW 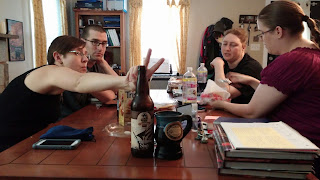 Leaving Anura behind, the party headed south into the swamp in the general direction of the isle of the dead. In spite of having 2 rangers in the party they made good time, all the while Riia pointing out that she's "not this kind of ranger" but rather a "city ranger" as she stabs every tree, vine, and shrub along the path.

Hours later Kethra grabs Riia from behind, pinning her arms. This catches about half the party by surprise. The other half of the party had spotted the dryad peeking out from behind the tree. Guy once again offers to engage with the dryads, but Nessendra takes on that chaste duty. She tells the dryad that they're on their way to the isle of the dead to retrieve something for Anura. The dryad and her sisters are suitably impressed that the party would do this, and offer them something to assist in their task. They scurry off, and return with a golden mace that seems none the worse for wear given that it's been in the swamp for goodness knows how long.

No one bothers to ask why a grove of dryads has a mace of disruption.

They also offer to assist with the one human who seems mentally deranged, but that offer is turned down while Riia tries to scream insults through Kethra's hand.

Guy, as ever, offers to lay with the dryads, and they're very excited about him being fertilizer, but Nessendra categorically nixes that idea, and shoos the party along.

While the rest of the day's hike is hot, muggy, muddy, and full of bugs, it is otherwise uneventful. The night was not so peaceful. While Guy and Anya were on watch, a pack of swamp drakes (the same sort of creatures Bach faced in the arena) were spotted just as it crept up to the edge of camp. With a lot of yelling, battle was joined! 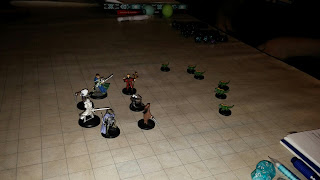 The fight was quick and bloody as the drakes teamed up against their opponents, but the party responded in kind, and when the last of the drakes turned to run it was cut down mercilessly.

Moving their camp away from the slain drakes, the party resumed their rest, leaving Guy and Anya, then Kethra and Nessendra to listen to the things in the dark consume the corpses.