0356 hours: Sensors have detected a large metallic mass on the surface of one of the larger moons. Adjusting course to conduct a more through scan.

0557 hours: The moon is Mars-like with a thin atmosphere, but it’s bathed in radiation from the gas giant. We’ll make orbit in about 10 minutes.

0723 hours: We’ve adjusted to a geostationary orbit over the metallic mass. It’s big enough to be an bulk transport ship. We’re securing the ship to land nearby and begin possible salvage operations.

1001 hours: We’ve touched down about a kilometer from the object. The first team out in 20 minutes.

1047 hours: First report back indicates that it is an old transport ship. It appears to have crashlanded a fairly long time ago.

1058 hours: The team reported back a registry number. 2266-M133... Checking... Ark Class Colony Transport from about 400 years ago, registered as the Wah Chang. 1701 colonists en-route to the Penthe system. Well they were seriously off course! On the other hand, there’s going to be lots of valuables in the cargo hold!

1222 hours: A hatch has been found and secured. The captain is sending in a scout team.

1250 hours: The scout team is through the airlock and into the ship.

1253 hours: Between the moon’s radiation and the ships radiation shielding, communications with the scout team is getting worse and worse. They’re going to try a relay system.

1328 hours: The relay wasn’t effective, so they’ll do hourly check-ins.

1430 hours: First check-in, the team reports the colonists were mostly killed on impact, though there are some indications that a few may have survived for a little while, and things were pretty rough. They’ve even found some corridors that were barricaded.

1530 hours: They think they found the body of an alien! The captain ordered them to bring it back to the ship! 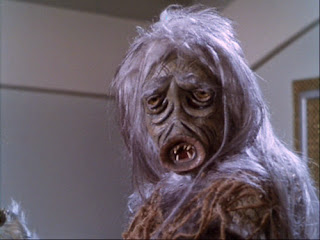 Salt Vampires are a form of giant mutated leech. In their natural form they appear as grey skinned humanoids with elongated rubbery limbs. Their skin is loose on their frame, and slick to the touch. They lack a discernible neck, and their round mouths are ringed with sharp teeth. Their hands and feet are sucker covered with 3 digits. Salt Vampires use a form of Mental Phantasm which allows them to appear as a non-offensive individual to whoever is viewing them. However, as this power is projected on the individual viewers, the Salt Vampires will all appear at least slightly different to each of the viewers.

In combat Salt Vampires will attempt to touch their target, and if successful will drain 1d3+1 points of constitution by sucking the salts from their victim. This damage can be restored at a rate of 1 point for every 2 weeks rest.

Salt Vampires dislike bright light, and suffer a penalty of 2 to their morale. Strangely the very thing that sustains them can kill them, and a pound of salt used as a weapon will cause 1d8 points of damage for 1d3 rounds and cause an automatic morale check.Due to their ancestry, it is very difficult to permanently kill a Salt Vampire, as they will regenerate 1 hp/day, even when killed, unless the body is either burned or sewn with salt.