Old Man of the Dungeon

"What's that?" Nimble whispers, trying to look past the torchlight down the dark corridor.

As quietly as possible Nimble notches an arrow on his shortbow, and begins to draw it back. His companions likewise prepare for whatever is coming toward them.

Slowly a hunched cloaked figure pulls itself around the corner and into the torchlight. Supporting itself on a cane is moves slowly toward the adventurers. "You don't want to go this way" a paper thin voice rasped.

“And why not?” Nimble asked.

“Sesska’s children are beyond, waiting for you.”

“Not a friend. Come.” A bony hand emerges from beneath the cloak and presses against a stone, causing a hidden door to swing open. “Come” the thin voice says again as it steps into the darkness. 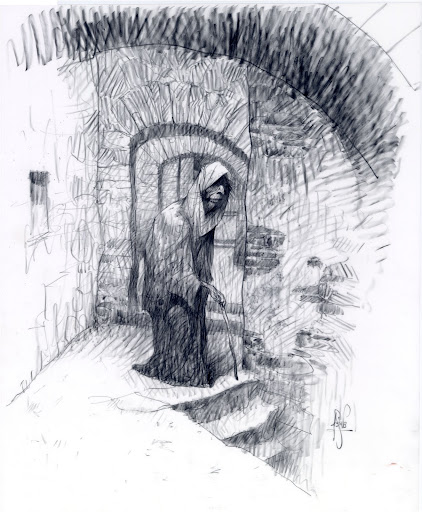 An age ago, the being known only as the Old Man of the Dungeon became trapped deep in the depths, injured and alone. Something happened to him, and he did not die. Time passed, and he moved about, exploring, keeping to himself. There are few secrets he hasn’t come to discover in the depths and fewer still that he is willing to share.

Yet occasionally for reasons unknown, he helps out in small ways those who are not confined to the depths, and asks nothing in return. This assistance may be as simple as a warning, or as elaborate as taking them to a safer area. The Old Man will never point out specific lairs or unguarded treasures, though he knows where they are. He will never be found when sought after, only appearing when he chooses to.

The truth is that the Old Man is just one of many aspects of the dungeon’s original creator. None of the creatures of the dungeon even view this aspect. Should you need stats, use a normal human with a single hit point. If he is ever killed by players, they will be left with an old and dirty cloak and a brittle walking stick, and will never encounter him again.

The Old Man of the Dungeon serves a variety of purposes in my Megadungeon. It allows me to give the dungeon a voice, and it gives me the option of pointing the players in a different direction. Whether they go in that direction is up to them, and whether I’ll ever use him for that reason, I don’t know yet. We’ll see!