A greater insect swarm is not simply a larger swarm of bugs, but rather a swarm of the nastiest insects that a fantasy world can produce. Like the lesser version, the swarm takes up an area of space 10’ x 10’ x 30’ and anyone caught in the area will take damage. Swatting at the swarm will reduce the damage by half. Weapons are generally ineffective, and spells that target only a single target will do only half damage, but area effect spells do double damage. There are a variety of different types of greater insect swarms, all of which use the above stat block with the following modifiers. 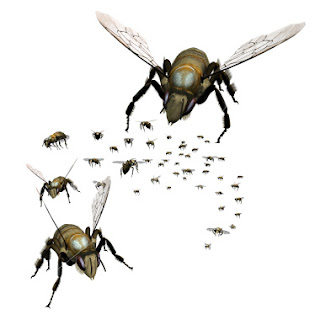 Giant Fire Ants: These ants are individually a pest at 3”-5” long, with a burning bite. Together in a swarm their infernal heat sets fire to anything flammable. Anyone in their 10’ x 10’ x 30’ area will take fire damage equal to their hit dice per round, and an additional 1d6 points of bite damage. Swatting them will reduce the bite damage by half.

Killer Bees: These bees are only 2" long, but they have the disposition of a pissed off red dragon. Anyone caught in this swarm will take 2d4+3 points of damage every round. In addition the buzzing of the bees creates a Cause Fear effect (as the Cleric spell) to anyone in the swarm. Anyone who fails their saving throw will be unable to take any action but running away from the swarm (including swatting) for 2 turns.

Blooderflys: This swarm moves slower than other flying swarms (Flying: 30' (10')). Anyone viewing their crimson, gold, and black wings must make a saving throw vs spells or be entranced by their beauty. Anyone so entranced will take no action as the swarm overtakes them. Once within the area of effect they will be drained of blood 1 hit point per round. Once a creature is reduced to half and then one quarter their hit points they may make additional saving throws. Anyone who passes their saving throw will be immune to the blooderfly swarm's entrancement power for a day.


You may have seen this on Saturday, but it wasn't supposed to post till today.