The sun baked landscape was spotted with yellow grasses and large broken boulders. Every step taken crunched beneath their feet, and the air was alive with the sounds of the wind and buzzing insects.

‘Well, what do we have here?” the voice asked from atop one of the larger stones.

Rathgar twisted around, and quickly trained the crossbow on the source of the voice. Perched upon a large rock sat a wingless gryphon, golden and black feathers forming a mane that framed its beaked head. Its muscles were tense in spite of its lazy pose.

“Oh, quite.” The creature replied amicably. “However, this is my territory, and you didn’t ask me if you could.”

“Don’t press us beast! You-” Rathgar stopped as Allianora put her hand upon his arm.

“Easy” Allianora cautioned. “We did not know that this territory was claimed. As he said, we’re just passing through.”

“Well then, of course you may pass through” the beast answered. “And how will you be thanking me for this privilege?”

The adventurers paused and looked at one another. “Uhhh…” Rathgar replied intelligently. “What do you want?”

“You there, magic user if I don’t miss my guess. Give me a spell.”

“We’re kind of in a hurry” Feris said nervously.

“That’s not my problem.”

“Let me see it.” Feris dug into his bag and handed the rolled up scroll to the creature. With rather amazing dexterity, it unrolled the scroll with it’s claws, and looked over the magical formula. “This will do” it nodded. “Best be on your way. Don’t dawdle now, go on. Oh, and if you hear crying, avoid it. M.T. will delay you unreasonably.” 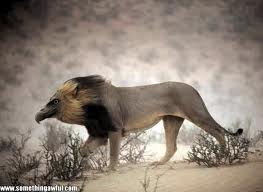 A Keythong has the head and claws of a raptor (usually an eagle), and the body of a lion. Unlike a gryphon, the Keythong is wingless, but far more intelligent. They are known to wear specially fashioned plates of armor reducing their AC to 2 (1 in 8 chance). Others have been known to become spell casters (wokan 6).