Once we realized that not only did the giants take hostages, but they were planning on eating them if we didn't give them food, we knew we had to not only get the hostages back, but we had to stop them from moving on and raiding anywhere else. We devised a plan while the town started gathering food and beer. We limited the food we sent by filling some bags with dirt, and others with a mix of food and dirt, and then we poisoned the beer.

A bugbear negotiator came to the gates, and we set a time and place for the exchange. Just out of bow shot from the town, and the reach of the giant's boulders. The exchange went smoother than we expected, and we raced the hostages back to the city. It didn't take long for the poisoned beer to have its effect. The goblins suffered the worst of it, while the bugbears and ogres were looking somewhat unsteady as they tried to rally the unresponsive goblins to their feet. The giants were looking angry, and soon enough, they charged the wall... but we were ready.

Because they were so far away there was the seemingly endless waiting... our barbarian friend Rin was especially frustrated with the delay, and to ease his frustration I enchanted flight... on the treant he'd been hanging out with! 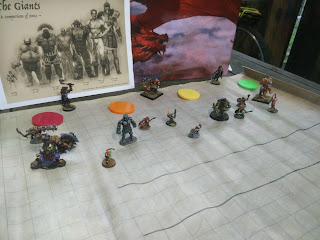 If you have never seen a flying tree (and I can't imagine any reason you would have) there is not a more unnatural sight. Add a barbarian clinging to the roots/feet of the tree, and it gets even more surreal. The tree and barbarian flew to the oncoming line, as the rest of us unleshed our weapons. Arrows flew from the guards, and magic from those who had it.

The ogres, armed with goblin launching catapults strapped to their backs, didn't let the fact that the goblins were dead stop them from using them, and while most missed, the sight of our monk catching one out of the air, and spiking it off the wall was another of the more memorable moments. That was followed close behind by Thorin repelling off the wall, and falling the last bit, then being rushed by one of the ogres. Don't worry, Thorin didn't even take a scratch from the ogre's clumsy assault, and in return he gutted the monster. 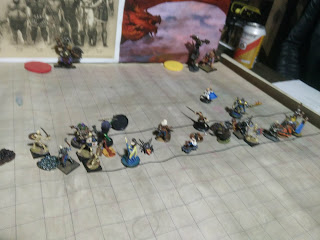 As the fight moved off the wall, one of the other visitors to the town was a whirling dervish with his glave. At one point he attacked one of the ogres from behind, shoving his weapon completely through to the otherside. The guts spilled out of both ends, and he then whipped it around, and he and Rin took out another in a display of gore that would have been more appropriate in a slaughterhouse. 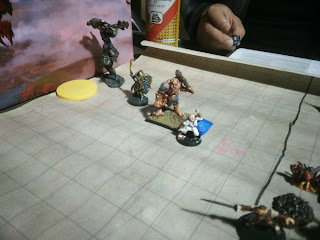 My own magics were more supportive this battle, but the lightning did bring one of the giants to his knees. For as much as I was worried those weeks ago, I should have trusted in the Great Digger's path.

After we disposed of the bodies, and made sure that all the goblins were in fact dead, we spent the next day in town celebrating. Several new leads opened up in our adventure... dare I call it a quest at this point? At this point we've already arrived in Waterdeep, and am dispatching this off to you before we follow up on those leads. More soon I'm sure.

Thorin asks me to send his regards, and to pass on that he is well to his parents. I tried to remind him to send his own letter, but he is as he ever has been.