Since moving, I’ve had to adjust how I engage in my hobby. No longer can I keep my painting station set up on my desk, with minis and paints strewn here, there, and anywhere else I feel like it. For one thing, I no longer have a desk! And I’m sharing the limited space I do have access to. Also, since the apartment has a serious lack of counter space, the “dining room” table (46" x 29") often gets used for food prep, and even more often, actually eating! 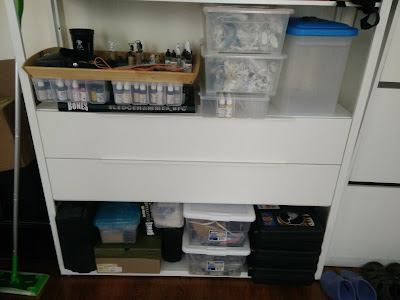 Storage space is also at a premium, an issue exacerbated with the arrival of Bones 3. Seriously, I had a lot of minis before… I had to put a whole bunch into storage. And now… I don’t even have room for Ma’al Drakar. He’s hanging out on top of my bookcase, and he takes up almost the whole top! At least while he’s in his box, I can stack other stuff on top of him. 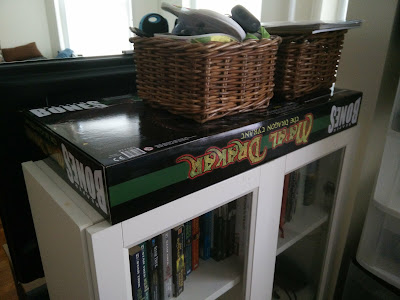 My solutions so far are to keep things as accessible as possible, while also making it as easy as possible to put everything away quickly and neatly.

Due to the limitations of physics, not everything can be equally as accessible at the same time… and it doesn’t need to be. Honestly, of the hundreds of minis I have with me, I’m rarely going to need access to more than a couple at a time. Everything else can be tucked away until needed. To make it easier to find something I’m looking for going forward, I’ve tried to organize it all as much as possible. Mostly this has involved plastic baggies. 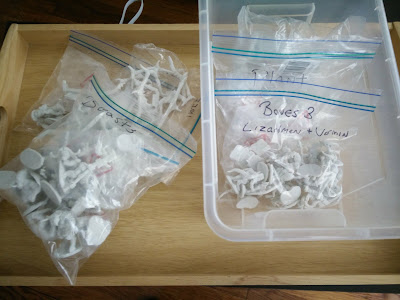 This is just one of the bins of Bones minis I've got semi-organized. For the most part Bones 1, 2, and 3 are segregated. Not sure I'm going to keep that up, or reorganize it all based more on theme rather than the kickstarter they came from. 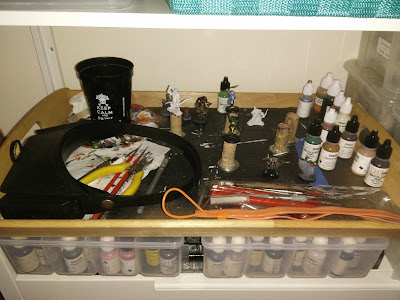 For the things I use most often, the minis I'm actively working on and the paints to paint them, I keep them on the upper shelf, the easiest to reach. I have an old tray with a piece of cardboard on it that has my active minis, and whatever paints I've used most often, along with the brushes tools, visor, and paint pallet. Under it are my cases of paint. When I want to paint, I simply take the tray to the table, set up my ott-light, and paint. Usually I move the cases of paint to sit on the chair next to me, and the laptop next to the tray. 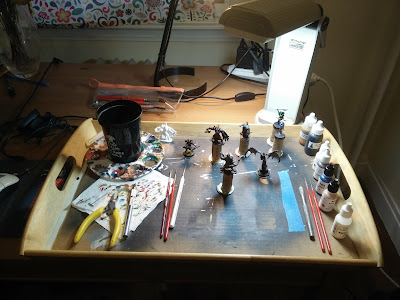