“Do you see that rock?” Aramil asked.

Hilwick nodded “Hard not to, given that it was as big as Buris’ hand and glowing like a torch.”

“We need to tell Arag about this.” Aramil put down his half empty tankard, and tried hard not to stare at the emaciated sorcerer who’d just entered the bar.

“I’m more concerned about that tattoo on his head.”

“Get back there and keep an eye on them.” Arag ordered, putting his cap on. Take Radoon with you.”


Samgos pushed open the tavern door, and limped inside, Arag just behind him. The sorcerer turned, his face lit by the giant emerald on the counter. Arag locked eyes with the sorcerer, and began to cast. The patrons in the bar began to scatter, the body guards lept into motion, one putting himself between the sorcerer and Arag, the other charging Arag directly.

The spell’s magic flashed out, and both bodyguards dropped to the floor unconscious, along with several of the patrons, and the barkeep. The sorcerer’s lips twitched downward. “Fools” he slurred as he pulled a wand and pointed it at Arag, completely missing the tankard thrown from the corner that smashed into the back of his tattooed head.

Arag stepped over the bodyguard, and seized the gem from the bar. “Fool? Not I…” He paused and looked down at the barely conscious sorcerer before drawing his dagger and slitting his throat. As the sorcerer’s blood pooled, the gem glowed brighter, and Arag gasped in pleasure. 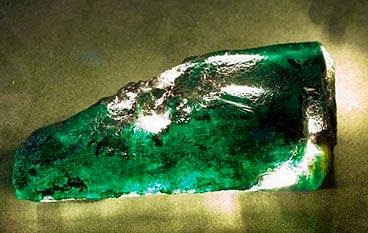 This large gem glows faintly with a soft inner light, equal to a single candle. The carrier of the gem will be able to draw the skills and powers of slain opponents. If the opponent was in some measurable way more skilled or powerful than the slayer, the slayer must make a saving throw vs spells. If passed, the slayer may claim some of the opponents essence. This will manifest in a wide variety of ways mechanically, for example: +1 HP, +1 Attack, +1 to a save, new spell slot (even for non-spellcasters), new weapon/armor skills, thief abilities, etc. The bonus will be determined by the DM in every case.

The power of the gem may be used once per day. Every time it is used, the gem’s glow will increase by the equivalent of 1 candle. The first time it is used the owners eyes will change to an unnatural brilliant emerald green. Every time after the initial use, the user must make an additional saving throw vs spells. For every failed roll, the user will lose 1 point from either their Constitution, Wisdom, or Charisma (roll a d6) as they are consumed with envy. Alternately, use the Mutant Future mutations charts or the DCC corruption charts.