One of the things that’s been rattling around in my head is the frequency of treasure, and specifically magic items, spurred by a couple of posts. John over at Dreams in the Liche House wrote about revisiting the Magic Shoppe and also about The Vast Wealth of Dungeons, While Brendan over at Necropraxis wrote about banking treasure.

But the one that really got me thinking? The Shadow that Magic Casts over at Edgar’s Game Blog. If you missed those posts, go read them now. I’ll wait. What follows will make more sense keeping these posts in mind.

I’ve always (since my return to old school gaming anyway) been a fan of XP for treasure. However there quickly develops the situation where you end up with low-mid level PCs having incredible amounts of coin sitting around. At low levels there isn’t so much to spend it on once you’ve got the best basic equipment, even factoring in carousing rules (more on this next week). The next logical steps are magic items and/or real estate, which brings us back to Brendan’s Bank, and John’s Magic Shoppe.


This is where Edgar’s post ties in. Crafting magic in old school games is generally the province of higher level wizards, and that’s one of the things I missed from 3.x. I liked being able to make scrolls, potions, and wands at low levels. It just seems like the sort of thing that wizards should be doing while the fighters are off blowing all their cash at the bar. I want to encourage that, but how to encourage it? First off, ditch the 3.x idea that you have to spend XP to make magic items. Wizards don’t become less experienced because they made something new. It was just a bad idea, which is why Pathfinder dropped it.

Wizards should get a reward (XP) for crafting magic items.

I’m thinking full XP if they spend their own cash, and half XP if someone else pays them. That would include any group cash. Also, the XP isn’t based on whether the item creation is successful or not.

So what rules for magic item creation? DCC gives wizards the opportunity to make magic items at pretty low level with Wizards Staff, Sword Magic, and Make Potion. Of course DCC involves a lot of rules that fall outside the usual D&D set. AD&D, OD&D, B/X, etc. all require that magic users be high level for magic item creation(except scrolls in B/X).

Robert Conley of Bat in the Attic Games created this Magic Item Creation Costs document which covers basic costs, but not the process.It's a good place to start... But what rules? 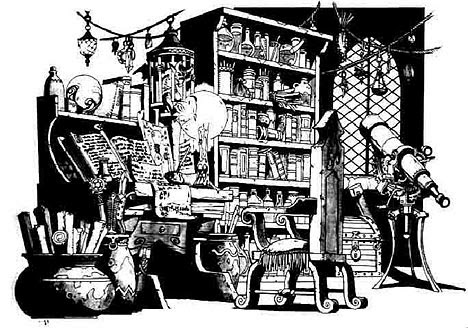 I want something relatively simple, but not guaranteed. Not ever. Even a level 36 archmage making a Scroll of Feather Fall might screw it up. It’s not likely, but if the ink runs a little, or smudges, well… And if it’s a major screw up, I want there to be varying levels of badness from singed eyebrows to you’ve accidentally opened a portal to hell and Satan is coming for tea.

In 3.x you’d make a skill check, but most old school games don’t have skills. Maybe a saving throw? Modified by the item type/power? The thing about both of these options is that they’re based on a D20 roll. Is that a problem? Maybe not…

I'm working on a draft rule for magic item creation that even a 1st level magic user can use. I'll probably post it Monday or Tuesday. More to follow!