When you hate what you’re working on...

I’m really not enjoying Elquin (Bones version). He’s coming along, and the progress is enough that I feel like I’ll be close to done with him soonish, but he isn’t fun to work on. 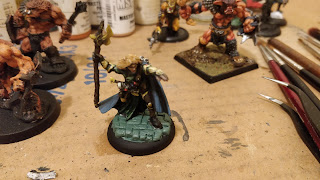 I’ve also been poking at Nella Cailean, and while I was generally happy with how her outfit was coming along, her face… I didn’t even bother taking pictures. I was seriously unhappy with her. I’m not great at painting female faces to begin with (and I’m only okay with male faces), but it just became a mess. My paint got too thick and chalky, and she ended up looking like she’d had a stroke, and a 30 year chain smoking habit, with caked on makeup. So I dumped her head first into a jar of simple green. Gonna have to start over. While I’m at it I might give her a staff… I'm hoping that I can get into a "Painting Female Faces" class at ReaperCon...

So those are my thoughts on 2 specific minis. In general, when working on a mini that I’ve come to hate (and really hate is too strong a word) I have to either junk it and start over like I’m doing with Nella, push through until I get to a spot where I think it’s starting to look okay (Elquin), or just walk away.

And I hate just walking away. I feel bad abandoning a mini I’m working on. Which is weird, because there are some minis I don’t mind walking away from, but those are ones that I don’t have strong feelings about. Like the giants I’ve painted. They’re just… eh. Done enough for tabletop.