From the grimoire of Ostanes the Ancient:

The fey of the sea have created various artifacts for interactions with surface dwellers. Among the most common are rings, bracelets, and necklaces that are enchanted with the ability to breath water and to speak the language of the sea-fey. Forged in underwater volcanic vents, and adorned with pearls, these trinkets are often sought out by those who sail the seas.

However anyone who seeks these charms needs to be aware that many, if not most of them, are also enchanted with other spells directed at the wearers. Commonly encountered are charms that will enthrall the wearer to the first fey they encounter, permanent polymorph into sea creatures or sea-fey, and even outright curses.

One such ring is illustrated below. Careful examination has revealed that anyone putting on the ring  will grow gills, permanently, and while they also keep their lungs, the gills must be kept moist. It also grants the wearer a full understanding and command of the sea-fey dialect. 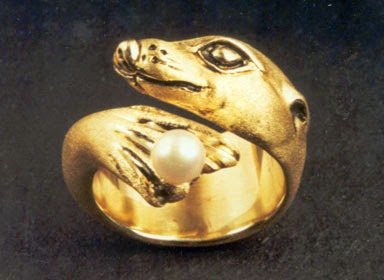