Saturday I had the pleasure of running a game at the winter Charm City Gameday. I've never run a game at a convention before, so I was a little nervous going into it. Not only was I going to be running with people I didn't know, I was doing it in an environment that I wasn't the most familiar with, surrounded by lots of gamers playing other games (mostly Magic the Gathering at a 64 person tournament going on in the same room).

I decided to run the Tomb of Rakoss the Undying, which I've previously reviewed. If you read the review, you'll note that I didn't think very highly of it, calling it an amateurish intro adventure for higher level characters. One of the guys behind the adventure commented, and suggested that my review was perhaps a bit unfair. Over the last 2+ months since I wrote the review, I decided that maybe he was right. Reviewing something that I had only read, and not used at the table was maybe unfair. So when the call for DMs for the Charm City Gameday went out, I signed up to run ToRtU.

To prep for the game I reread the adventure a couple of times in the week leading up to the event, dug out my copy of Labyrinth Lord, the adventure, a DMs screen, minis for all the monsters and characters, my battle mat, dice and pencils. I then used the Labyrinth Lord Character Generator to make 4 fighters, 3 clerics, thieves, and wizards, and an elf, dwarf, and halfling (all 5th or 6th level). I also made sure I had my markers, paper towels, and some water bottles. Everything but the battle mat and the paper towels fit nicely into a plastic bin. 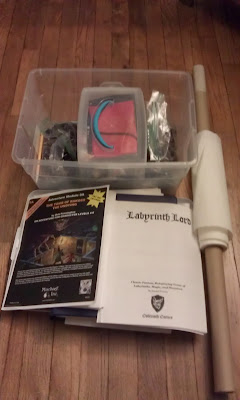 Once I got to Games and Stuff, I was directed to my table, and started getting set up. 5 out of 6 players showed up, so while waiting to see if player 6 would show, I handed out the pregens, and went over the basics, both of Labyrinth Lord and the day's adventure. I also told them the one major house rule I'd be using - The Order of the d30.

Going around the table starting on my left, the 5 players chose Fighter, Thief, Cleric, Cleric, Elf. The guy playing the Fighter for whatever reason just didn't have his head in the game. I'm kind of glad he was right next to me, since I could nudge him along (i.e. "ok, roll this, now this." "Did you want to attack this guy, or that guy?"). He was the only one who didn't have his own dice, and didn't seem to know D&D at all.

Running the game, I did my best to keep everything moving. There aren't a lot of personalities in the adventure for the PCs to interact with, so I tried my best to make the one big one memorable. When they suggested crazy shit, I went with it. All in all I think it went well. The players seemed to have fun, I feel like I did a good job, and we managed to fill the time almost exactly.

Tomorrow I'm going to write specifically about the adventure, so stay tuned!