"We need a distraction." Nimble muttered.

"What sort of distraction." Feris asked.

"A quiet one. Something that'll focus the guards so that we can get up and over the wall. Something that won't immediately draw their attention to us, so... not a fireball."

"I think this'll work..." Feris dropped his satchel, and started rummaging through it. Down near the bottom was a long thin box. Removing the ties that held it shut revealed a reddish brown figure. "Ready?"

Feris mumbled a few arcane sounds, and the statue grew turning and running toward the guard post, spinning it's glave toward the nearest guard. The shouts of pain and surprise were enough, and Nimble and Feris made for the wall. 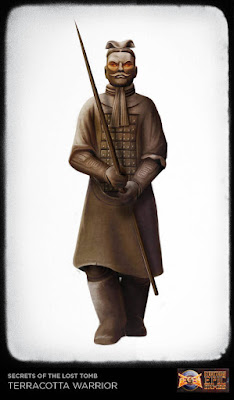 To utilize this spell, a wizard must prepare a 6" tall terracotta warrior worth at least 100gp. This small statue is fragile, and can be easily broken if roughly handled. When enchanted by the spell, the statue will immediately grow to 6' tall, and for the duration of the spell act as the wizard wills it. At the end of the spell, the statue will shrink back to it's 6" tall form, instantly healing any damage it suffered. Should the statue be destroyed while enchanted, it will not revert to its smaller form, and a new statue will need to be made. Every wizards statue will be tied to them, and no other wizard may use another's statue.

Spell inspired by one from Oriental Adventures from D&D 3.0