I showed off 3/4 of the conversions in my last post. For the final guy, I decided to give him a sword. Well, it’s really more of a really big jungle blade than a propper sword. Originally I was going for something a little more fantastic looking, but my plasticard skills are not that good. Once I’d glued the blade into the handle, it was time to start painting. But first, bases! 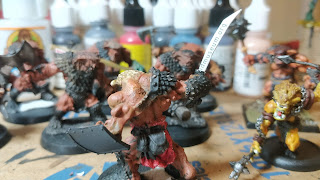 I actually struggled a bit on what bases to use for these guys. I’ve got a lot of different bases, but I’m actually out of the 40mm square bases I used for the first guy. I tried them out on 32mm bases that they were a little too big for. It would have worked, but not looked as good. I ended up using a small stash of GW round 40mm bases that I’m pretty sure were supposed to be for some Riders of Rohan. Ah well, they’ll need something else if/when I get back to them.

Now, I’d already done a bit of color matching, but there was a fair bit of rubbed off paint, so everything that needed it got more Brown Liner. I then used pumpkin orange on their exposed skin. It isn’t a color that covers well by itself, certainly not in one layer, but it’s the shade I’m looking for so… I also painted the eyes, noses, and mouths with Walnut Brown, and then painted the eyeballs and teeth with Linen White. The irises were painted with Forest Green. 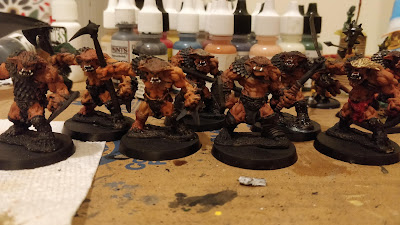 More Pumpkin Orange, mixed with some Tanned Flesh, and then Rosy Flesh for the skin. The armor and weapons were painted with Scorched Metal as the base color. 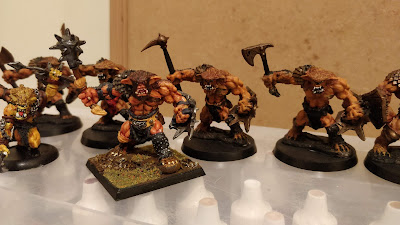 I was originally think of going more blond with the hair, kinda like the old Chainmail Bugbear, but Reaper’s are a little less lion-esk, and I like how my original Bones Bugbear looks, so I went darker, using a tiny bit of Walnut Brown mixed with a couple drops of Pumpkin Orange. 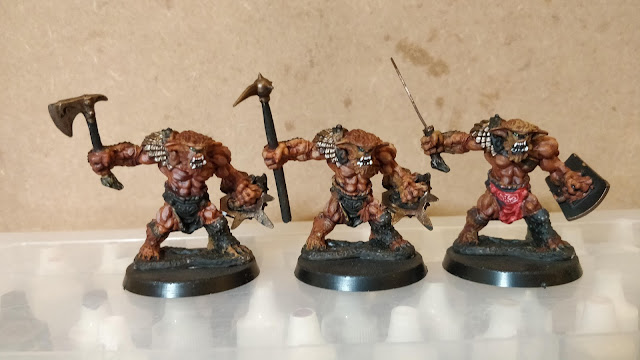 The leather straps and belt were painted first with Walnut Brown, then with Tanned Leather. The loincloths, shin and forearm coverings were painted with a mix of Cloudy Grey and Blue, as close as I could get to whatever GW grey I used on the original bugbear. I also used Forest Green on their coin pouches.

There are going to be some remarkably uniform bugbears. Whoever equipped them was remarkably consistent!

Their skin could use a little more highlight after the wash, so Tanned Skin plus a bit of Pumpkin Orange was used for that. 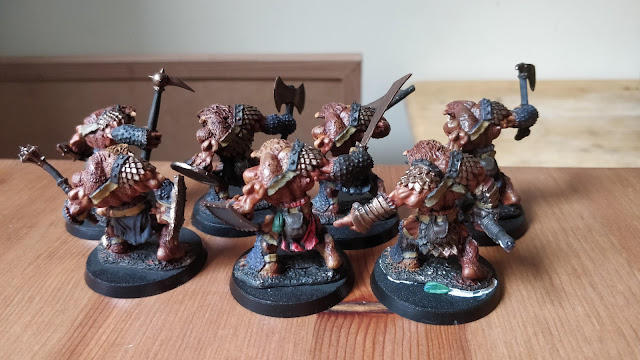 Next up will be finishing the weapons and armor, maybe one more highlight on the skin, and then the bases.