This post from the Michael Garcia (aka the Crazy GM) , and the Google+ thread that it spawned discuss where to put the entrance to the megadungeon. The gist is that the dungeon entrance should be right next to the town, or even in it!

There are lots of examples of this in both video games and in RPGs. the one that is probably most familiar to RPG players is Waterdeep and Undermountain - the megadungeon is literally under the city with numerous known and even more unknown ways into and out of the dungeon.

The reason I’m bringing this up is that for my own megadungeon my plan was to put the dungeon entrance on the side of the mountain, up a long staircase that would take days to climb... While it makes a cool mental image, I’m reconsidering this decision, or at least considering modifying it.

What if within the dungeon there are portals which can be activated/attuned to individuals that all return to the city center at the base of the dungeon. This would allow delvers to get into deep areas of the dungeon without having to go through the upper levels, and provides clear goals for the delvers to keep pressing deeper into the dungeon.

Imagine a group of new delvers going into the dungeon with an experienced delver. They portal straight to level 3. Over the course of the adventure the vet is killed, and the new guys flee back through the portal. The next time they’re ready to go in, they can either take the portal to level 3, or climb the mountain. 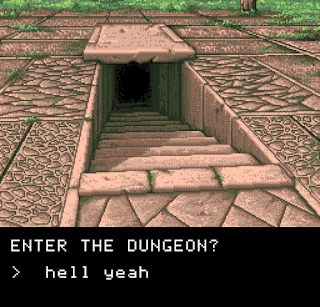 First time delvers would have to climb the mountain, though I imagine that some enterprising souls might have made it to the first portal if only to ferry people into the dungeon. Some of these guys may even have set up an ambush in the portal room to catch the adventurers unaware...