Is there a reason you picked this as the place to camp for the night? Nimble asked as he looked out into the darkness.

The small fire popped before Rathgar could answer. "We wouldn't have made it to the next inn, and we're fairly sheltered here. Why?"

"Because I don't think those are hills."

Rathgar pushed the stick he was twiddling into the fire and stood up to look out where Nimble was staring. Under the light of the halfmoon rise and fall of the grass covered hills did seem steeper than usual. The sparse trees did nothing to make the view feel anything but desolate.

"What do you think they are?"

Nimble didn't answer right away. His eyes searched the darkness, and his face tightened. His arm snapped up, finger pointing "It isn't what I saw... I heard..."

A soft, almost gentle keening seemed to rise up from the shadows between the hills. Above the crest of the nearest hill a figure caught the moonlight and seemed to glow as is sped blindingly fast down toward the camp.

Rathgar's sword was drawn in the blink of an eye, ready to meet the creature. 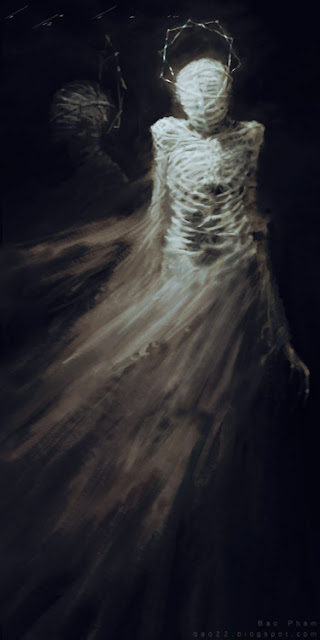 Bone Wrapped are corporeal undead creatures that appear to be gaunt humanoids encased in small finger sized bones from the waist up, and empty shrouds from the waist down. Around their heads are 10 pointed halos created from a pair of interlocked pentagrams. Bone Wrapped hover above the ground, and move with an unearthly speed. They attack with their claws, draining 1 point of dexterity and the cold of the grave seeps into their victim. Anyone reduced to 0 dexterity is dead, and will rise as a Bone Wrapped the next sunset. Those suffering from dexterity damage may recover 1 point/day of rest or with 5th level curative magic.

Anyone attempting to attack a Bone Wrapped must make a saving throw vs spells or suffer a -2 penalty to all rolls until they can take a full day's rest.


Tim Brannan of The Other Side blog is hosting a blog fest in honor of Halloween. On Monday, October 29, participants post a monster. 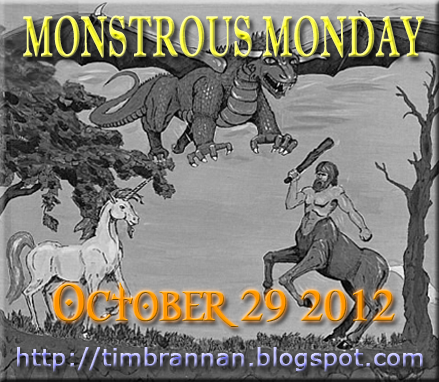