The road to Winterhaven

My cousins want to play Dungeons and Dragons 4e tomorrow.  I thought about running them through the little delve at the back of the DMG, but I think instead I'm going to use a tweaked version of KotSF.  I'll be using a combination of The Alexandrian's and Myrhdraak's remixes.  This will be the first real experience with 4e for me, as I've never played or DMed it. I have however listened to a number of podcasts, and read a whole lot, so I feel pretty prepared.

I do wish I had a few more kobold minis though.  My selection of D&D specific minis is somewhat uneven.  There are a lot of things I can fill in with other minis, especially my Lord of the Rings stuff, but I've got a whole 3 kobold minis, and no dragonborn minis at all, and LotR isn't going to help me out with those at all.

There are of course a variety of alternatives like paper counters (Fiery Dragon), or fold up minis (One Monk Minis), but I have to say that I really like having actual minis, and they're even better if I painted them and they're metal.  Especially for character minis.  The fact that I don't have a single dragonborn mini bugs me.  There aren't a whole lot of them out there either.  I did see a neat conversion of this chronopia mini into a dragonborn which I've been tempted to try my hand at. 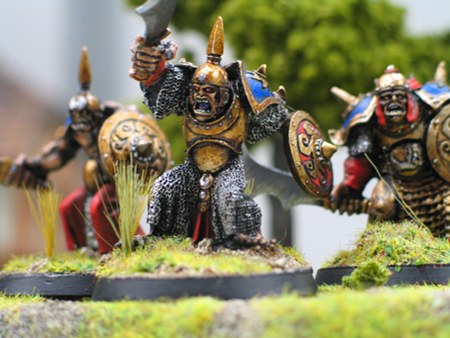 But as I don't yet own this mini, it isn't exactly on the front burner.

I'll let you know how it goes!