The smell wafting down the corridor was a strange mix of ozone, smoke, and oddly enough pond water.  Accompanying the odd smell we the sounds of metallic movement, and ever so faintly, sloshing.
Nimble inched forward along the corridor toward the light spilling from the slightly ajar door. On the scale of weird things, it didn't top the list, but it certainly was up there. 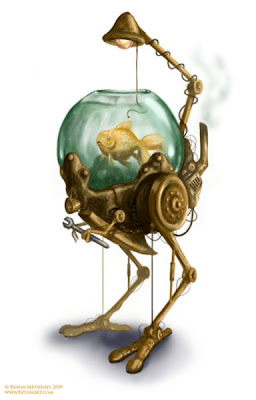 It seemed to be working on something, a machine of some sort.  Nimble leaned forward to get a better look.  The room this thing was in was clearly a large work space, filled will all manner of tools and implements.  Various pipes, wires, and tubes running across the walls and ceiling.  The thing started to turn, and Nimble pulled back, knowing that one glassy eye had seen him.
"Do come in" a strangely flat voice called out.

The Inventor is an intelligent carp who could be encountered anywhere from the depths of a dungeon to a warehouse workshop in the middle of a city.  It is extremely knowledgeable about steam-power and mechanics, though most of his creations tend to be flawed in some way that eventually fails rather spectacularly.  It doesn't know it's gender, as it's never had occasion to meet another of it's (intelligent) kind, and so hasn't spent any time thinking about it.


It's current bowl was created by a wizard as payment for services, and the walking device was designed by the Inventor himself.  There are actually 2 walking devices.  The original one is simple and low powered in comparison, and he uses it to upgrade the more advanced version.  These two creations are the only ones that do not regularly fail.  It does like to get out of it's bowl and relax in a personal pond which contains a variety of plants.

The Inventor's work area will be protected at all times by a steam powered warden (treat as a obsidian golem).  As well as a variety of mechanical traps.

Email ThisBlogThis!Share to TwitterShare to FacebookShare to Pinterest
Labels: fluff/inspiration