I mentioned yesterday that I'd pulled out some dreadmere mercenaries to work on... but they weren't the obvious choice. Having wrapped up both a D&D campaign and a painting project, and then cleaning a few other things off my tray, I sat down to think about what I want to work on next. And nothing jumped out at me.

So then I dug through my unpainted minis… and did not feel the spark of inspiration. Partly it’s because I’m still trying to decide what to play in the next campaign, and want to paint that. Problem is, I don’t know what *that* is yet. And the few minis that did call out to me were all female. So… maybe I’ll play a female character?

Until I settle on something, I decided I’m going to paint up some Dreadmere mercs. For some reason I seem to have acquired a second set of them at some point, and I’ve got a 3rd set coming with Bone 4. I think I’ll use those for some conversions.

Other than that, I’ve still got the Mordheim ogre mercenary on my tray, and the demon statue to wrap up. Oh, and the next time I pull out greenstuff, I’m gonna try to sculpt a lamp for the genie.

However, on to the minis! 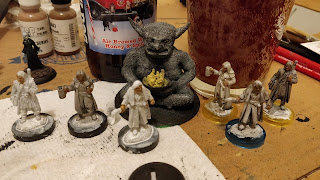 I started out by washing and basing them, and them priming with Reaper's Brush On White Primer. I then gave them a wash with black wash to bring out some details. Then I painted their hands and faces with Ruddy Flesh and Tanned Shadow. I noticed that the paint wasn't sticking as well as I'm used to. The paints were glazing on, rather than sticking. I don't know if that's a feature of the brush on primer, or if it's gone bad. I'm thinking its gone bad. 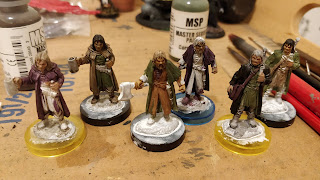 I then used Muddy Olive, Burgundy Wine, Nut Brown, and Umber Brown, as well as Black and Linen White to start painting them up.

And this is what they looked like after a couple of hours of painting. 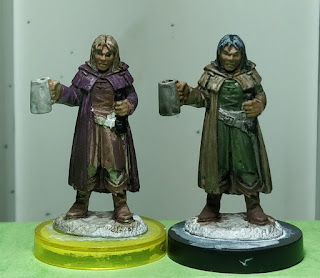 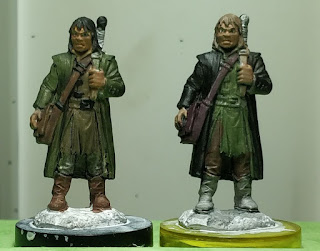 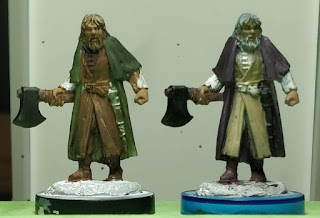