Gaming
I introduced a side dungeon (one of several that are out there) and man am I jazzed about running this game. Especially as my players are bloody DITHERING about taking on the mummy lord I introduced MONTHS AGO. Like, it’s nice to see them just taking on the bad guys and nasty monsters, negotiating with the intelligent goblins (rather than just mowing them down), and just acting like the higher level adventurers they are.

Curse of Strahd is cruising along. Feeling a little railroad-y but the effort our DM is putting into it is both impressive and a little boggling. We play for about 3 hours a week, and she ends up doing 12+ hours of prep a week. Wow...I’m horribly behind on session write ups, so I think I’ll do a catchup of some sort, then jump back in.

Miniatures
There hasn’t been a lot of time to work on things, but I snuck a little time to work on my gnolls. They’ve probably got another 2 hours or so of work before they’re done. 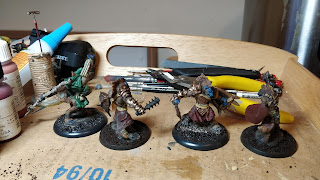