Frostgrave: On A Frozen River

With far too long a break, I finally got in a game of Frostgrave! Saturday we assembled the usual suspects and played the second game of the 2017 Thaw of the Lich Lord campaign, though for me it was game 1.

The Doctors Ecclescake and Payne had rounded up a rowdy bunch of ne'er do wells to help them find... something that Doctor Payne will need for the Time War. A pair of scoundrels (thieves) and five archers were rounded out by a crested felldrake (wardog) joined the Doctors. Unfortunately Dr. Ecclescake was unable to remember what it was they were looking for, or where it might be (Failed Reveal Secret attempt) but they did notice some activity down by the river, so off they went.

As they reached the bank of the river of ice, they beheld a spectacular sight... Ships of all shapes and sizes were frozen in place, rotted sails and rigging hanging like cobwebs. Unfortunately the activity was Chaffarn summoner to the right, and the sigilist Quail across the way. 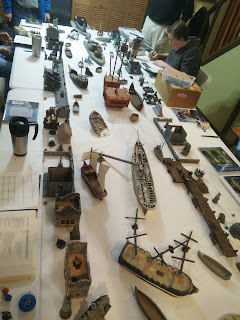 The Doctors started at the top right of this picture, with Quail at the bottom, and Chaffarn to the top left. 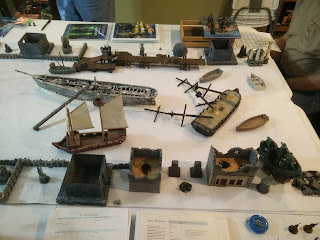 My ship was in the center of the table. 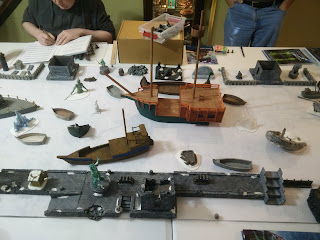 A large dwarven warship dominated the far end of the table. 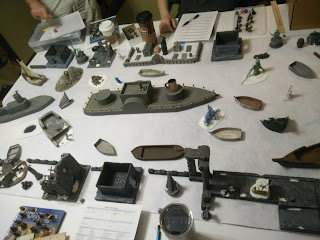 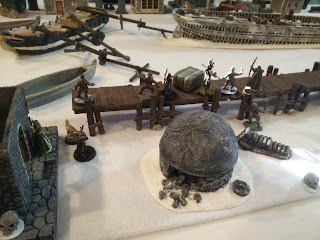 Doctor Ecclescake starts by heading fearlessly out onto the river. He tries to speed things up with Fleet Feet, but the effect fizzles. The archer Elfie slips on the ice, while Harad and Thief 1 make for one of the wrecks. The drake heads out toward the larger hull, but gets an arrow from beyond a fog bank that popped up blocking the view to the far bank. Another fog bank rises up to the right, blocking the view along the ice to where the summoner is. Doctor Payne tries to Mind Control one of the summoner's troops, but even after cranking up the sonic screwdriver (boosted the spell for 3 points!!) the magical fog seemed to hinder the spell.

Blazing across the sky appeared two glowing sigils, Draining Words that made Telekinesis and Bone Dart harder to cast... Truly some dark magics were being used with little regard for their impact on the local Time/Space.

Seeing the drake injured, Ecclescake gives it a speed boost (Fleet Feet), only to see it take another arrow moments later, falling unmoving to the ice. Thief 1 grabs a chest from the frosty deck. Doctor Payne tries to Mind Control Quail's knight that was scaling the large hull, but once again, could not get the effect to stick. 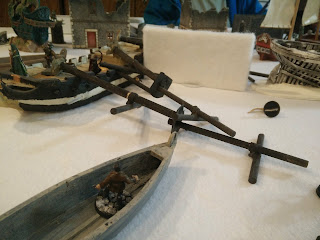 Thief 2, Gnolly the archer, and Dunedain the archer move toward the large hull. 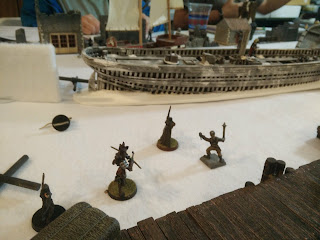 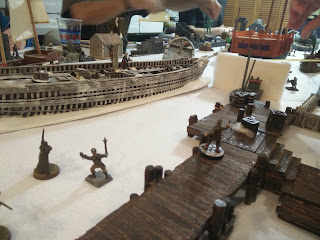 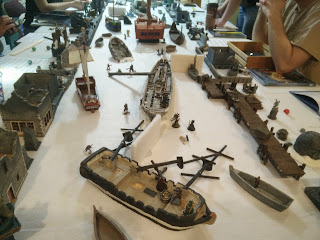 An unnatural calm fell over the river a moment before fat flakes began to fall from the sky. Doctor Ecclescake shifts his temporal location a smidge making him appear to move faster than normal (Fleet Feet). Doctor Payne tries and fails to Blind the knight now on the deck of the ship. Thief 2 and Dunedain also scale the hull, but so does another of Quail's troops, a man at arms! Harad puts an arrow into a thief who was climbing right behind the man at arms.

As all this is going on, another Mage emerges from a hatch in the deck carrying a sack. He tries to use some sort of magical bolt attack, but the chaos on the deck is too distracting. Doctor Ecclescake tries to Blind the Mage, but he can't get the screwdriver to line up with her eyes. Payne again tries and fails to Mind Control the knight. Thief 2 pushes off the man at arms, and rushes for the edge of the ship. Gnolly shoots at the Mage, who was engaged by the knight, but hits the knight instead. Elfie and Harad take pot shots at the man at arms, but miss. The Mage fells the knight, then leaps from the ship down to the ice. Leafie the archer, who had accomplished nothing, was sniped by Quail's archer. 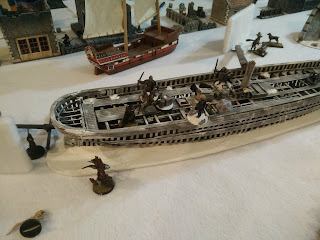 The snow storm intensified, making shooting even harder than before...

Doctor Ecclescake thwacks the sonic screwdriver against the boat's hull, and then takes another shot at Blinding the Mage, succeeding finally. Payne mind controls Quail's little thief Kinny, who in the chaos of the melee had snuck onto the big ship. 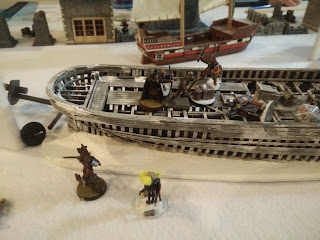 The man at arms decides that the Mage is the real threat and leaps after her. Gnolly kills the Mage before the man at arms can get in the killing blow. Payne orders Kinny to kill the man at arms, and she leaps from the ship after him, cutting him deeply. Dunedain followed after her, lodging an arrow into the man at arms on his way down. Kinny, seeing her friend felled, snaps out of the control. 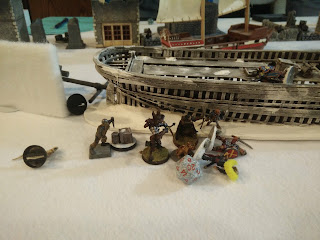 Meanwhile Chaffarn's treasure hunter briefly came into view through the snow and fog at the prow of the ship. She grabbed the coffer that was on the deck. Ecclescake took the opportunity to Mind Control her just as she tucked the coffer under her arm. Right behind her a demonic form lurched over the railing onto the deck. Ecclescake ordered her to kill the abomination, and she does, then jumps down, only to be set upon by Chaffarn's rottie. 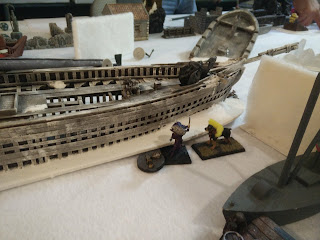 Ecclescake turns the screwdriver on the dog, Blinding it. Payne tries to make the treasure hunter faster (Fleet Feet), but fails. The treasure hunter kills the dog, and starts to move toward Payne with the treasure. Through the fog, Chaffarn's man at arms, possessed by some otherworldly force charges toward the treasure hunter, killing her.  Gnolly and Dunedain turn him into a pin cushion, but don't stop him.

The storm gets worse yet again, and Ecclescake orders everyone back to the TARDIS, then mind controls the possessed man at arms. Fortunately, his broken mind is easy to sway, and he grabs the treasure.

Through the unnatural storm, they make their way back to the TARDIS, tucked safely in the base of a Tower. 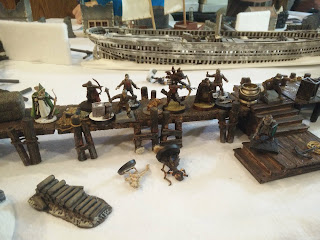 The Felldrake did not survive exposure on the river, but Leafy, useless as she way, showed back up with a small scratch and a lump on her head from slipping on the ice after being clipped by the arrow.

Of the treasures recovered, the one dropped by the Mage turned out to be worthless. Dusty pages that disintegrated instantly. The 4 other treasures recovered included a grimoire of Plane Walk and Absorb Knowledge (which the Doctors already had, so was sold for 250 gold), a mighty Club of Battering (matching the one found by Quail), and 565 gold (815 gold total).

In addition, THe Doctors earned 200xp from the treasures, 50xp for the party killing one of the Mages, 25xp for going out onto the ice, and 120xp for spells cast during the game. Additionally, once back at the TARDIS, the Doctors successfully used their Absorb Knowledge for an additional 50xp, for a total of 445xp, and 4th level!