I had planned on sharing my boat building efforts as more of a work in progress over several posts, but instead you get to see the whole (phase 1) process from start to finish.

I started out by figuring just how big I wanted this tub to be. I sketched out the basic hull shape, and then started cutting out chunks of foam to build the core of the structure. The I started gluing it all together. 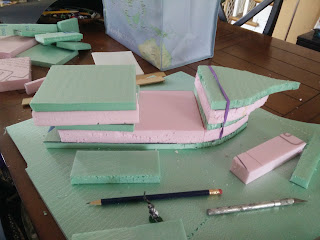 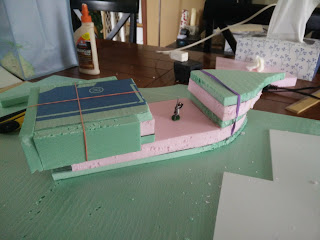 As the dragon boat idea seemed to catch my gaming group's interest, I decided to make a wing template to see how it would look. The idea here being that the wing would form the railing for the forecastle and the main deck. Haven't given much thought on how to do the dragon head yet. 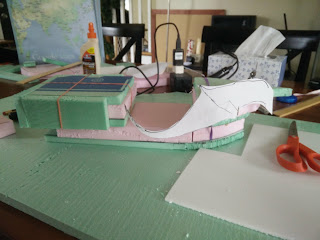 Laying down the deck... I do wish I had considered the width of the craft sticks when building the ship. It's hard to see, but the ship is just a tiny bit wider than the craft sticks, so I had to trim some down to hide the gap. Also, building out the stern, I should have made it solid, and not tacked on the bits on the side and back. 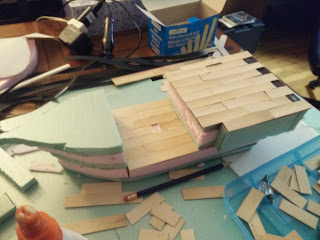 Trying to figure out how to handle the curve... 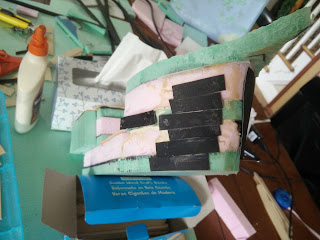 I hate working with paper, but I didn't have the time to work out how to bend craft sticks to match the prow, so.... 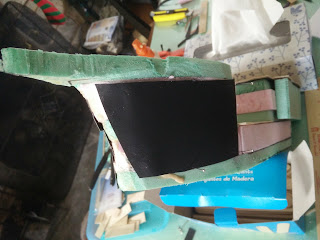 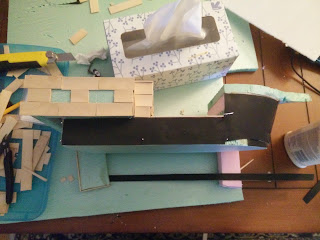 It's a little hard to see, but the decks are warped. The craft sticks all bent, curling away from the foam, I think from the moisture of the glue. I hadn't considered that, and while it sort of works for a ruined Frostgrave ship it isn't ideal. 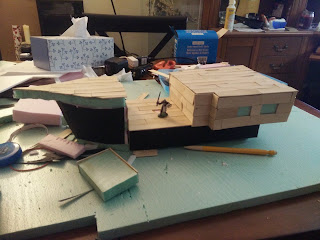 I used cut up sections of chop sticks for the railing posts. It also helped to disguise the ugly work of the sides. 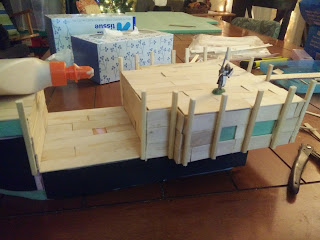 With the decks done, it was time to get to work adding the planks to the hull. Again, with paper... 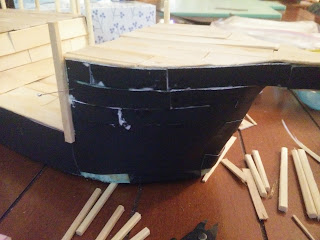 But since paper curls when wet (just like the wood) it turned into an acupuncture horror story. 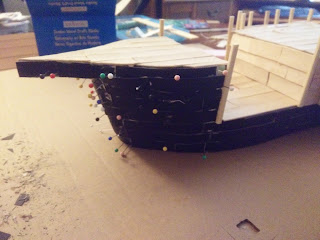 Using coffee stirrers I added the railing. Enough cover to hinder ranged attacks, but not block them completely. 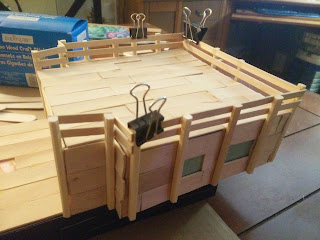 Some minis for scale. 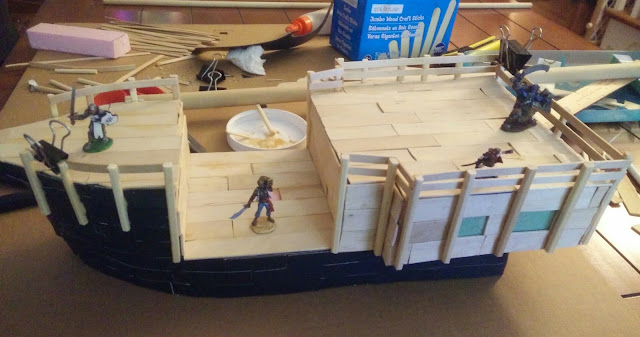 And a look at the underside. While trying to sand down the foam I accidentally removed a chunk of the stern. I used some craft sticks to repair/hide the damage. 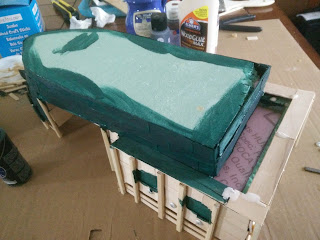 I skipped taking a bunch of pictures during the painting process, but the lower hull was "fathom green" and the upper section was a blend of orange and brown to make a rust color. The deck I originally painted with a light sand color, but then brushed a medium brown over it. The railings were just the orange without the brown. 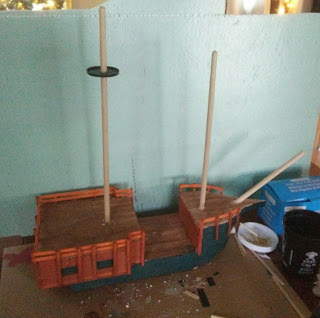 Crows nest in progress. I took a Reaper RPG 2" base, drilled a hole in it closer to the edge rather than in the middle so that there would actually be space for a mini to stand in it. 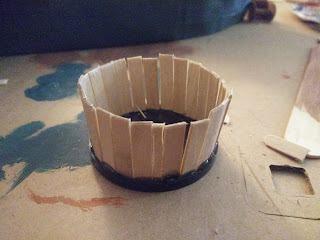 To go with the dragon theme, I mixed the fathom green with some grey and added these scales. It looks okay, and will look better when I add the wings. 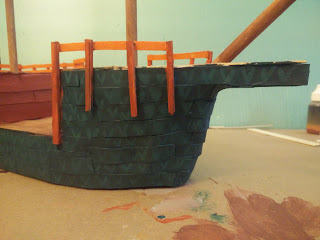 The masts are removable for ease of storage/transportation. 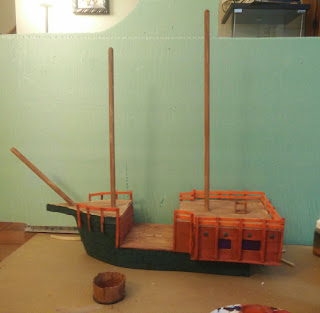 This will be the ship's wheel. Just need the actual wheels. 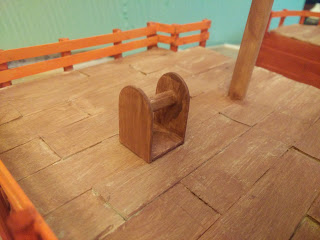 I'm going to add a ring around the top of the nest so it looks less like just a bunch of sticks sticking out of a base. 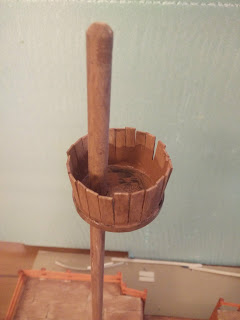 And here she is at the end of phase 1 with some minis for scale. 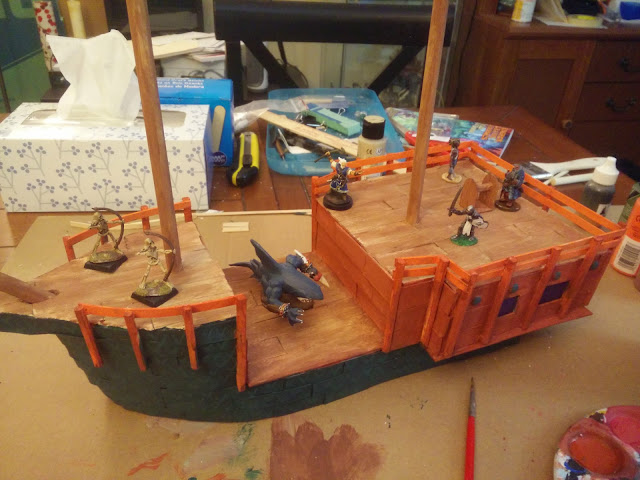 For game purposes, I made sure the upper decks are just over 3" so anyone falling off of them will take damage, and the crow's nest is deep enough to hide a treasure from telekinesis spells and high enough that jump doesn't reach it, even from the deck. I also avoided making the ship very ruined, since I want it to be useful in both Frostgrave and potentially in the spin off game Ghost Archipelago.

Phase 2, when I get to it, is going to include the dragon wings and head, adding some doors, stairs, and hatches. I also want to add some yards to the masts, and maybe some rigging, though I'm not sure how well that will work while trying to keep them removable. I might dress up the windows too. And it'll definitely need a name plaque! (once I settle on a name...)

I've also been thinking about making a ring of broken ice that I can set the ship into so that it'll better fit the frozen theme, and also create some fun difficult terrain to get over before the climb onto the ship.