This week, book 4 of the Steel Empires urban fantasy/alternate series is released! In a world with vampires, warrior-mages, weredragons, and sarcastic violin players, time travel seems like the obvious next step. Read on for an excerpt from Steel Time, by friend J.L. Gribble. 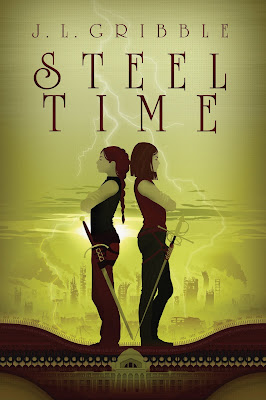 ABOUT THE BOOK
You’re never too young or too old to experience a paradigm shift.
Toria Connor is 25 when tripping over an artifact in the ruins of Nacostina thrusts her a century into the past, before the city is destroyed during the Last War. Now, she finds herself alone. Adrift in a time where she must hide everything important to her, from her mercenary career to her true magical ability.
Victory is over eight centuries old when she follows her adopted daughter. She has seen empires rise and fall, but never anything like this. She must survive alone in a city inhospitable to vampires, dodging friends and foes from her past alike.
Both of them know the clock is ticking down to the moment when the city is wiped off the map. Now, they’re in a race against time. To find each other. To escape the past. And to save the future.
Currently available from:
AmazonBarnes & NobleDirect from publisherCarpe Librum (the author’s local indie bookseller)Or support your own local independent bookstore by requesting a copy today!
ABOUT THE SERIES
It is possible to read Steel Time as a stand-alone book, but don’t miss out on Toria and Victory’s previous adventures!
Book 1: Steel VictoryBook 2: Steel MagicBook 2: Steel Blood
EXCERPT
Victory reined in uncoordinated limbs and staggered to her feet, drawing her sword and ignoring the ache in her tailbone. She dropped into a defensive position and turned full circle, bracing for attack.
None came. She stood alone in a long gallery. Moonlight poured in from high windows, and red emergency lighting at the far end of the hall reflected on marble floors. Display cases lined the walls, and her enhanced eyesight picked minerals and gemstones out of the darkness. Even as the back of her mind cataloged karat weights and worth, the rest of her brain noted something much more urgent.
She was alone in this museum gallery. No heartbeats. No Toria.
The muted sounds of a city at night penetrated the gallery. Including, of all things, more liquid-fuel engines than she’d heard in one place since her visit to Jiang Yi Yue, a city where the vehicles ran on ethanol.
A museum gallery. Gasoline-powered engines.
Even inside, she scented the tang of gasoline below the harsh aroma of cleaning supplies and traces of body odor from those who had passed through this hall today.
A museum gallery, with a type of emergency lighting she hadn’t seen in years.
Gasoline engines.
It was like she’d gone back in time.
Ridiculous.
Buried among the smells of other people, she plucked out one in particular. After so many years, she knew her daughter’s unique scent—her skin, her hair, her sword. Even if Toria wasn’t here now, she had been in the recent past.
With no immediate attack imminent, Victory sheathed her sword.
The long hall had exits at either end. Flipping a mental coin, Victory picked a direction. It was child’s play to pick the basic lock on the massive metal door and haul it open.
Once through, she found herself on the second-floor balcony of a tall rotunda. Moonlight filtered into the large windows closer to the ceiling, and the marble architecture shimmered in the pale light. The entrance to another exhibit gallery sat opposite the wide expanse of space, this one advertising the flora of the New Continent. Victory stepped to the edge of the balcony and peered down, onto the dusty top of a giant stuffed mammoth.
“Hank.” Her voice, no more than a whisper, seemed to echo in the emptiness. She recognized the animal, or at least the affectionate term by which visitors had known it. She knew this museum, which was why Toria had asked her along on this job.
She could no longer pretend this was anything else. She had returned to Nacostina before the Last War, before the destruction of the city. Her fingers gripped the marble railing at the balcony’s edge. Of all the things, her first worry was how pissed off Asaron would be when she disappeared off the face of the planet. Whenever she left Limani, he assumed the role of Master of the City. He did so with lots of begrudging complaints, but deep down, Victory knew he enjoyed the change of pace from traditional mercenary life.
But the kids lived dangerous lives, having followed in the footsteps of their adopted mother and grandfather. Victory always took the chance to spend time with them, even if it meant traipsing around a ruined city hunting for a rock.
Victory was hundreds of years old. She had seen the rise and fall of civilizations. She had already experienced one complete paradigm shift when the elves blocked the progress of technology. It wasn’t so far-fetched that she might experience another.
Time travel. Who’d have thought?
So, two goals. Find Toria. Find the way home.
But first, she had to break out of a museum. Victory examined her options, what she could see and what she could remember. Lots of windows in the gallery she had come from, but they consisted of many panes. The heavy leading would be a chore to break through. Massive front doors out of the bottom of the rotunda where Hank surveyed his domain would also be tricky to disguise an escape.
There had to be other ways out of the building. Staff entrances. Loading docks. Things she’d never had reason to pay attention to, and therefore had no reason to remember now.
At least security cameras were not a concern in this era.
The thud-thud of a heartbeat shattered the silence, accompanied by boots sauntering across marble flooring and relaxed breathing.
Security guards, however, were a concern.
ABOUT THE AUTHOR 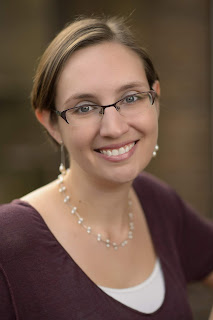 By day, J. L. Gribble is a professional medical editor. By night, she does freelance fiction editing in all genres, along with reading, playing video games, and occasionally even writing. She is currently working on the Steel Empires series for Dog Star Books, the science-fiction/adventure imprint of Raw Dog Screaming Press. Previously, she was an editor for the Far Worlds anthology.
Gribble studied English at St. Mary’s College of Maryland. She received her Master’s degree in Writing Popular Fiction from Seton Hill University in Greensburg, Pennsylvania, where her debut novel Steel Victory was her thesis for the program.
She lives in Ellicott City, Maryland, with her husband and three vocal Siamese cats.
Find her online at:
WebsiteFacebookTwitterInstagramGoodreads