A warm breeze gently picked up, blowing toward the party creeping down the dungeon corridor. "Do you smell cinnamon?" Nimble asked over his shoulder.

Everyone paused and sniffed the air. "Yeah, I do" Allianora nodded.

"Makes me want some hot cider." Feris said with a smile.

"I'll make sure you get a mug when we get back." Rathgar clapped Feris on the shoulder. "Come on. Let's find that warlock and be on our way."

The dusty dry walls of the hall stretched on with doors to either side spaced out along it's length. After clearing and passing several without finding anything, Nimble grumbled "Where is he?"

From knee level a sweet voice called out "Closer than you know!" followed by Nimble howling in pain as a wooden roller slammed into his kneecap. The flat humanoid form stepped away from the wall and swung at him again, but Nimble jumped away.

"What in the nine hells?!" He asked, kicking at the brown thing.

Feris pointed at the figure, and it lifted inches off the ground. It swung the rolling pin again, turning to face the wall, and used the pin to push off right toward Nimble. The bludgeon continued to spin in the grip of the figure, aiming right at Nimble's gut.

"Got it" Rathgar called out, pulling the release on his crossbow. The bolt skewered the figure dead center, passing cleanly though. It cried out in pain, chunks of the thing's chest crumbled but continued to float with it.

Nimble, having recovered a measure of his sense, smashed it with the flat of his short sword's blade, breaking it into spinning chunks. 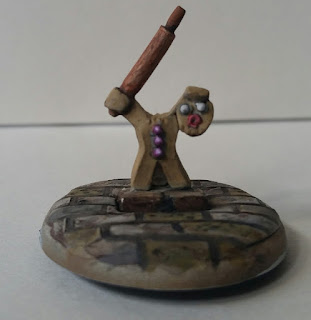 These small constructs are of little danger by themselves, but tend to be created in batches of 2d6. They are obnoxiously cunning, and often speak in a manner similar to that of their creators. It is unclear if they themselves possess intelligence, or if it is merely a drop of the creator being mixed into the batch. They become stale after about a week, causing their action die to drop to a d16. After a second week, they crumble away.